Coetir Mynydd is a charitable private company limited by guarantee set up in 2003 by people in Mynydd Llandegai to own and take care of the Coed y Parc dam and surrounding woodlands on behalf of the community. Coetir Mynydd is principally concerned with stewardship of woodland and biodiversity.

If you want to know more about Coetir Mynydd or the woodlands check our website  and Facebook page .  New members are always welcome!

Well – we do own a dam which was built in 1847 to power the works at Felin Fawr so hydro power is an intrinsic part of the history of the site.

As owners of the dam and woods Coetir Mynydd needs a sustainable source of funds to maintain the property and to support the appreciation and management of local woodlands, biodiversity, local history and culture.

From the start it seemed obvious to put these things together and to look at installing a modern hydro on the Galedffrwd.

We are calling the scheme Ynni’r Ocar.

How does a hydro work? 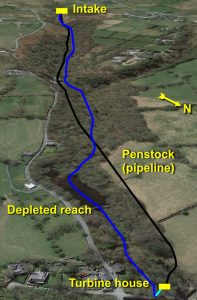 At its simplest – you take some of the water from high on a river (the intake) put it into a pipe (called a penstock) and run it down-hill, through a turbine and put it back into the river. The section of the river which is missing some water is called the depleted reach. The greater the vertical distance (called the head) between the intake and turbine the more power you can generate (because of gravity).

The maximum power you could generate would be to put all the water into the pipe but this is never allowed – the amount you can take out (abstract) from the river is controlled in two ways:

There is a lot of water in the river when it has just rained and most of the water for the hydro is taken during these periods, with low flows being unaffected. So a hydro only produces power when the river effectively has water to spare.

How much power will be generated?

For the Galedffrwd, a pipe of 56 cm diameter will carry enough water to run a turbine rated at 237 kW. Multiplying this by the length of time the turbine is likely to be running we anticipate being able to generate 770 MWh of electricity per year.

An average house uses 3,800 kWh, so the Galedffwrd could produce enough electricity for 200 houses, which means notionally Mynydd Llandegai could be self-sufficient in electricity and save 356 tonnes of equivalent carbon emissions per year.

What will change because there is less water in the depleted reach of the river?

Flows will only be lower than they would otherwise have been for 37% of the time and for much of this the river levels will be so high that what is taken out will hardly be noticeable. The main impact is a reduction in flow rates at modest flows, which could lower humidity levels along the river.

Bryophytes (mosses and liverworts) often need higher humidity levels, but detailed surveys along the Galedffrwd showed that these would not be seriously affected providing tree cover is maintained. Guidance from experts also suggests that other wildlife such as otters or fish would also not be affected.

What is the impact of the intake weir?

The intake is in effect a small dam which will control the flow of water so it can be directed into the pipe.

A fish pass will be fitted at the intake so that fish can continue to move up and down the river.

What will be the impact of the pipe?

The pipe will run over ground for most of its length so it should have little effect on the ground or nearby trees. Much of the penstock is not easily visible from public road or footpaths but there are a few places where it may be considered unsightly.

It should be possible with a bit of ingenuity and forward planning to screen the pipe with vegetation.

How much mess will there be during construction?

This is a good question! In any properly designed and executed scheme, construction is as light as possible but some disturbance is inevitable. It is during the detailed planning stage that it is most important to consider construction impacts. The choice of pipe installation method will be critical and we do not yet have a feeling for what is possible in the Galedffrwd.

What about impacts on wildlife during construction?

All trees along the penstock have been mapped so the pipe can be routed to avoid trees (and their roots) and so that few trees need to be removed. Surveys of otters and bats have identified important areas for these species which will be carefully managed by screening, provision of alternative sites and most importantly, by timing construction (seasons and time of day) to avoid disturbance.

What about historical features?

No major archaeological features were identified on the proposed route of the pipeline. However, there has been a hydro in the valley before, and the proposal is to follow the line of the historical penstock. This is marked by low supporting walls and concrete supports for river crossings.

Gwynedd Archaeological Trust have visited the site and have asked that these features be photographed and recorded before being disturbed.

What benefits could the hydro bring to the community?

There are some obvious ones:

How much would it cost?

We won’t know this exactly until the detailed design is done after obtaining planning consent. A ball-park figure would be in the region of £800,000 to £900,000.

Is the scheme financially viable?

The short answer is yes! A longer answer is complicated and involves details of how the power is sold, at what price, to whom, and how the capital is raised…
These are complex issues, with many different options. At this stage we really just need to know what our community thinks of such a scheme going ahead.

Well, if a community consultation is favourable:

Note: At each application changes may be requested or permission denied. There are costs of around £10,000+ attached to this stage – which needs to be found.

Once consenting is obtained

Coetir Mynydd would look to pass the scheme to a developer, which could be a community endeavour.

It is now that we will get a clear idea of what will happen, to identify and design management and mitigation of any adverse impacts. The management plan is key to fitting the scheme and choosing appropriate installation methods etc. Contractors are engaged to implement the design according to the management plan. We are considering putting clauses in the contracts so contractors will have to put any excess damage right and perhaps pay compensation.

It is only once all this is in place will we know how much the scheme will cost.

More facts and figures about the scheme are here.